Through our Corporate Social Responsibility (CSR) fund, Bouygues Energies & Services have been able to sponsor athlete, Ross Sinclair, to represent Team GB at the Special Olympics World Games in Abu Dhabi next month.

Ross was selected to represent GB as part of the Men’s Football Squad, following his success at national trials in February 2018. However, the GB Special Olympics Team is not government funded, so they rely heavily on fundraising and donations. Which is how Bouygues Energies & Services came to be involved!

Aware of the Bouygues Energies & Services central CSR fund, Ross’ older brother – Cameron Sinclair, a Quantity Surveyor based in our Scotland office – decided to apply on Ross’ behalf, with great success. The £2,500.00 contribution from Bouygues Energies & Services has significantly eased the pressure to fundraise and will allow Ross' local team - Scotland West - to fund their three athletes, without impacting all the other young people they serve.

Speaking about the opportunity, Ross said,

"The Special Olympics has given me the confidence to mix with new people. I have played in 2 regional games and brought home bronze medals both times. To be chosen for the world games has been an amazing opportunity, as it helps me meet people from all over the world and see new places. Just to be chosen is life changing, but it would also be wonderful bring back a medal for Team GB. I would also like to say thank you to all at Bouygues Energies & Services who have helped with the sponsorship.”

As the Special Olympics World Games draw closer the Men’s Football Team reaches the final stages of their preparation. They’ve been on several training camps recently and had their final session last weekend at the legendary FA training facility: St George’s Park. They have even been featured on Sky Sports News, with reporter, Vinny O’Connor, getting an inside preview of the team’s preparations.

Athletes selected to represent their country in the Special Olympics are split into regional teams, with these teams funding athletes to attend the games. Ross is part of the Scotland West Special Olympics team, along with two other selected athletes, which brought the funding total for Scotland West to over £7k. Though a very worthy cause and a once-in-a-lifetime opportunity for the athletes, this amount represents a significant sum of money for a charitable organisation, which is why they encouraged the athletes and their families to fundraise as much as possible. 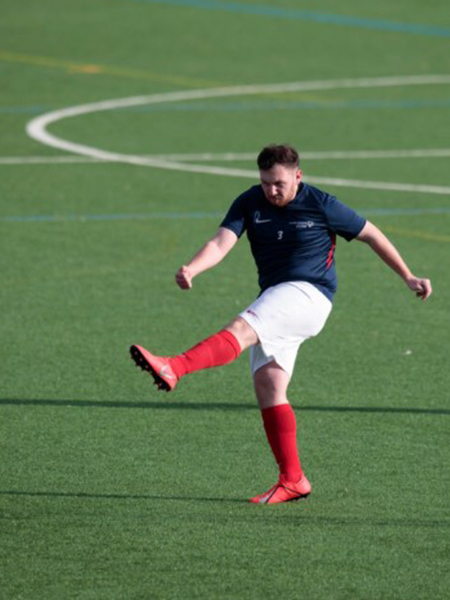 Ross started playing football for a team when he was 16. Living with mild autism, Ross found the experience of a boys’ team fairly challenging, as he struggled with the language that his peers used and had difficulties grasping how to be part of a team. While he is a highly competent footballer, Ross struggles with social situations and new environments, which made joining a team extremely difficult. His teammates didn’t necessarily understand his challenges and weren’t open to taking the extra time to help him out.

After his tenth training session with the squad, Ross was asked not to return, as the coach suggested that he made the other players feel uncomfortable. This was incredibly upsetting for both Ross and his family, but fortunately his school recommended the Scotland West Special Olympics team and Ross now has the opportunity to travel the world with his sport.

In 2017 he was part of the Scotland West squad that attended the national games in Sheffield, experiencing great success and leaving with the Bronze Medal. Then in February 2018 he was invited to trial for the Team GB squad, ultimately leading to his selection for this year’s Abu Dhabi games.

About the Special Olympics

The Special Olympics were established in 1968, following the determination of Eunice Kennedy Shriver to give young people living with intellectual disabilities the opportunity to participate and compete in athletic activities. The first games took place in Chicago, USA, with over 1000 athletes competing from the United States and Canada. By the mid-80s, the Special Olympics had gained momentum in more than 50 countries, with over 4000 athletes attending the 1983 international games in Louisiana, USA.

Today, the Special Olympics movement continues on its mission of providing year-round sports training and athletic competition for children and adults with intellectual abilities. This year’s games from the 14th-21st March in Abu Dhabi will see over 7,500 athletes take part, travelling from 190 countries to participate in 24 Olympic sports.